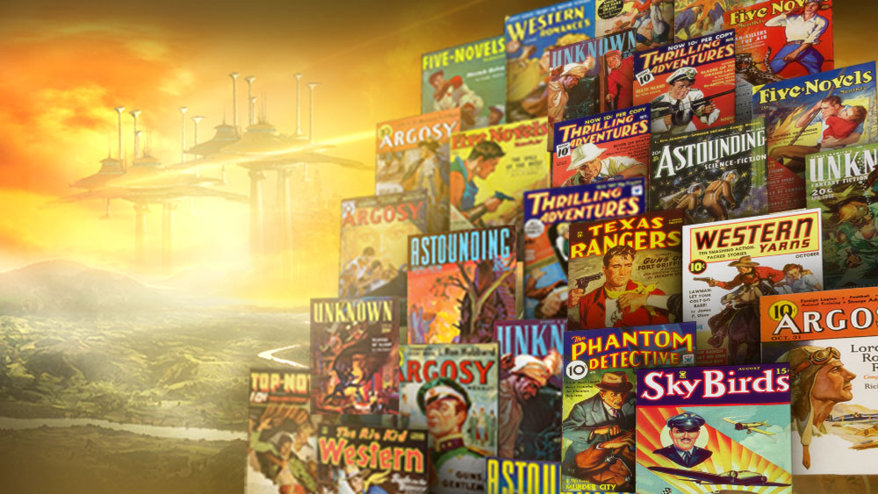 With 19 New York Times bestsellers and more than 250 million copies of his works in circulation, L. Ron Hubbard is among the most acclaimed and widely read authors of our time. He was further among the most prolific and popular writers through the Golden Age of Pulp Fiction. Indeed, between 1934 and 1940, some 140 L. Ron Hubbard tales appeared in the pages of legendary Pulps—often as many as three titles an issue and bylined under some fifteen pen names.

To meet such demand, he regularly produced between seventy-five and a hundred thousand words a month, with a 90 percent acceptance rate from publishers—first draft, first submission. Consequently, rarely a month passed when the name L. Ron Hubbard did not grace the cover of a major Pulp magazine.

That his stories were uniquely drawn from true-to-life experience, including then-rare voyages to Asia and the South Pacific, is likewise part of the L. Ron Hubbard legend. While as another word on the substance behind that legend: between fictional tales of high-seas adventure and far-flung exploration, L. Ron Hubbard captained two expeditions to the Caribbean and yet another across the Alaska Panhandle. Accordingly, and before the age of thirty, he was admitted to the famed Explorers Club and earned a rare Master Mariner’s license.

With the publication of Dianetics: The Modern Science of Mental Health in 1950, his more serious research kept him from literary pursuits for the next three decades. In 1980, however, to celebrate his fiftieth anniversary as a novelist and storyteller, L. Ron Hubbard returned to the field with his universally acclaimed science fiction epic, Battlefield Earth: A Saga of the Year 3000. The work was an immediate bestseller and subsequently earned a host of international awards.

What is generally regarded as L. Ron Hubbard’s magnum opus, however, is the ten-volume Mission Earth series. Also an immediate international bestseller, the series is still landmark in publishing history. Moreover, with a third generation of readers now discovering the tales of L. Ron Hubbard, he has forever secured his place in the annals of popular fiction.

Find out more at L. Ron Hubbard’s Stories from the Golden Age.